In this blog post the motivation for the project, the development of the model, the workflow and the results will be addressed and if the reader desired further details, the links to the corresponding posts are provided.

In order to demonstrate the motivation as well as the importance of this project, a brief explanation regarding the grain growth process will be provided.

These particles are able to affect the grain growth of a microstructure because they reduce the surface area when a grain boundary contacts them. This is important because the driving force of this phenomenon is the grain boundary interfacial free energy.

We plan to use a data science approach to build process-structure linkages for grain boundary pinning simulations during grain growth. These linkages will be constructed by first identifying the underlying correlations between an initial distribution of precipitates and the final grain size distribution of the microstructure of interest. Ultimately these linkages will be used to build a surrogate model for SPPARKS.

If further details are desired about pinned grain growth, the objective and the motivation please visit this (post).

The details of the simulations are the following:

In total 220 simulations were performed while varying the following parameters:

The simulation pool was built from 5 different initial distributions while varying the above parameters which were defined by us and consulted with SANDIA. The classes defined are believe to encompass a representative space of the possible distributions found in real life. It is important to mention that these pool can be expanded as deemed possible for further use and validation.

The 5 classes used are the following: 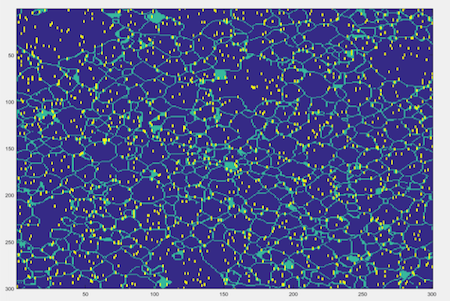 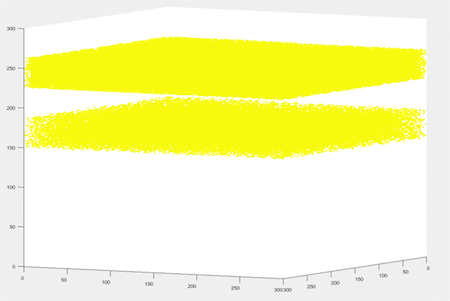 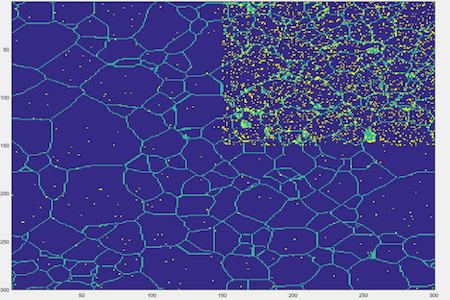 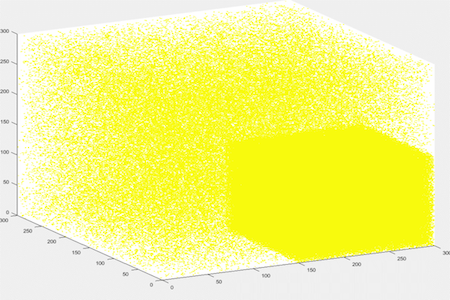 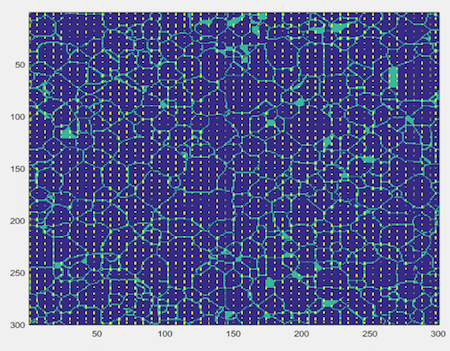 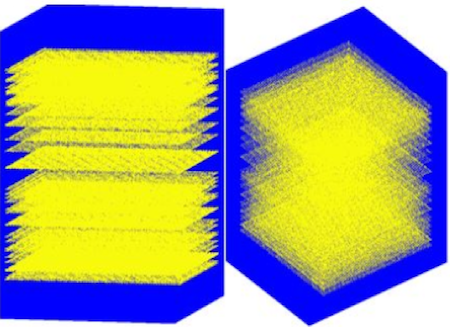 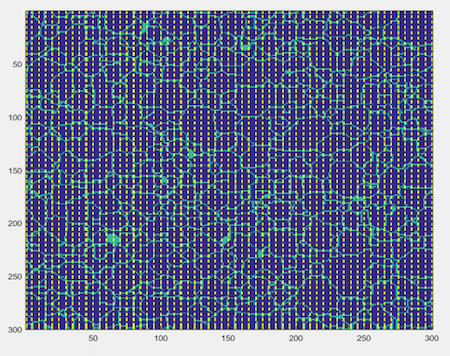 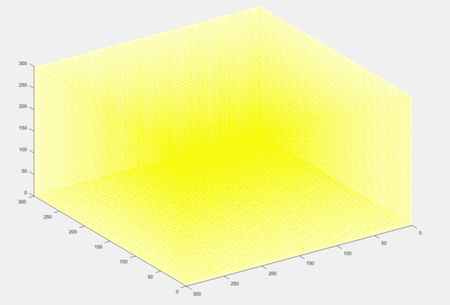 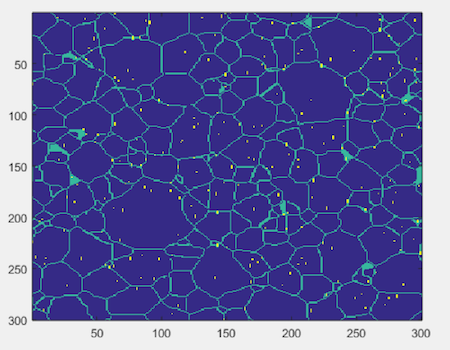 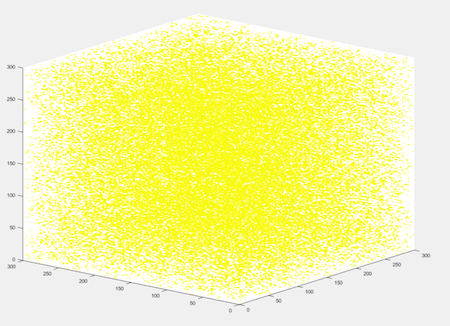 Please refer to this (post) for the details on how our data was processed and segmented.

Input and Output of the Surrogate Model

Now that the simulation pool has been built it is necessary to determine the inputs and outputs for the surrogate model to be built.

The output needs to be identified as well. It is known that the effective property that needs to be extracted from the simulations is the grain size distribution of the final microstructure. Thus it was decided that the best way to acquire this information was to obtain the chord length distribution in the 3 orthogonal directions from the simulation data. This distribution will be used as the output of the surrogate model. It is important to mention that this distribution is also affected by the parameters captured by the defined input for the model, alluding to our claim that the input and output are indeed related (but more on that later!).

We have now identified inputs and outputs for the surrogate model.

To see how we carry out each step, consider the following workflow diagram below. Note that each box is considered an “object” (or better yet, some kind of data stored on a computer) and each arrow represents a process or method (a code or script). 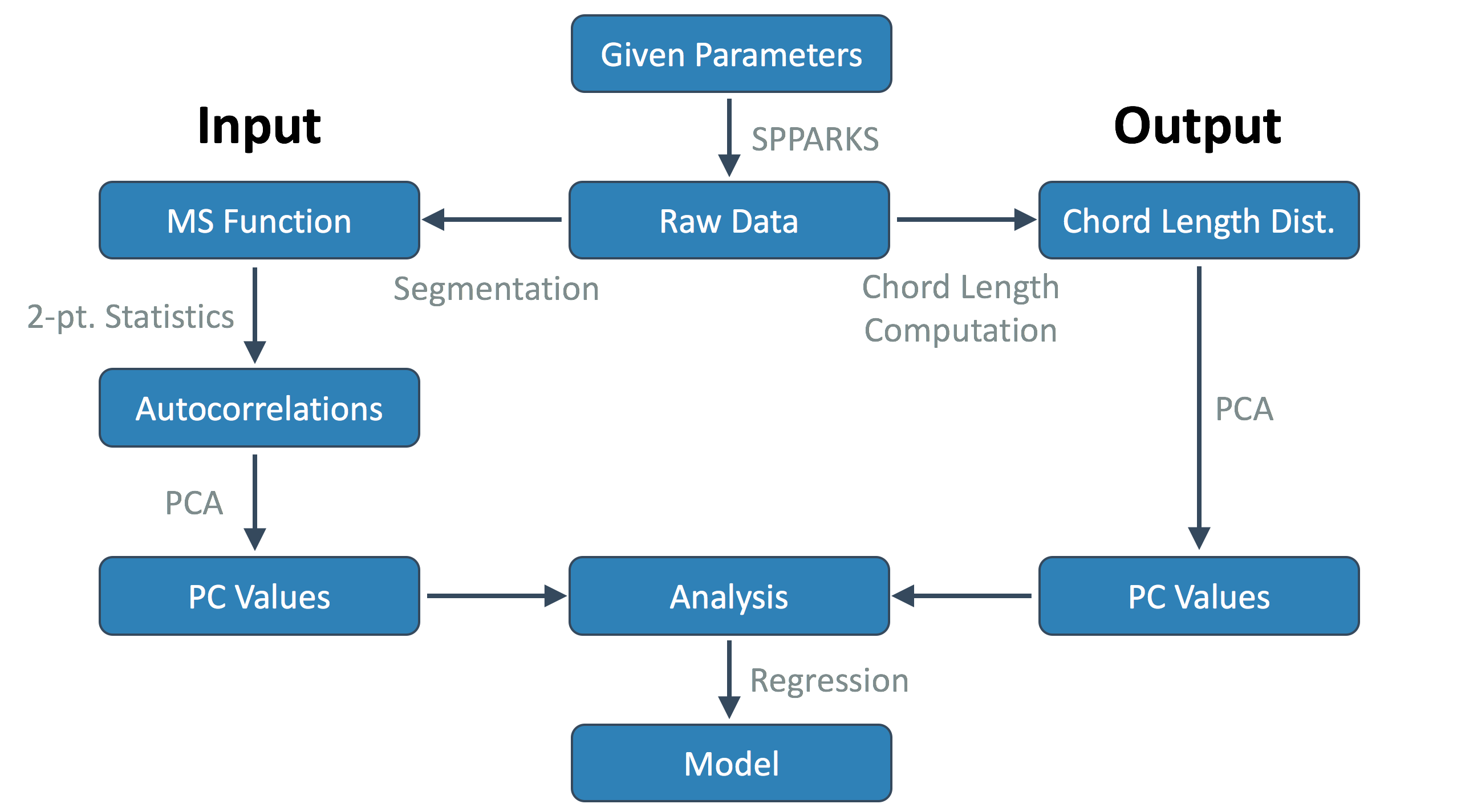 A significant portion of the time spent working on this project was spent creating this data pipeline so that new classes and simulations could be created and funneled through to join the rest of our data. Much of the above pipeline is automated, but we will touch on this at the end of the post.

As we move forward, assume we now have all of our data in a reduced space using PCA. We now will show some sanity checks to make sure our results are correct and make sense.

Recall we are using a code (SPPARKS) to perform our simulations. This code requires a final time-step to terminate at. In order to build a model we need to ensure we ran these simulations long enough, i.e. our pinned microstructure has reached some sort of steady state. To check this, we can consider one simulation from each of our five classes, compute the chord length distribution as time moves forward in the simulation, perform PCA and visual the expected path in PCA space. 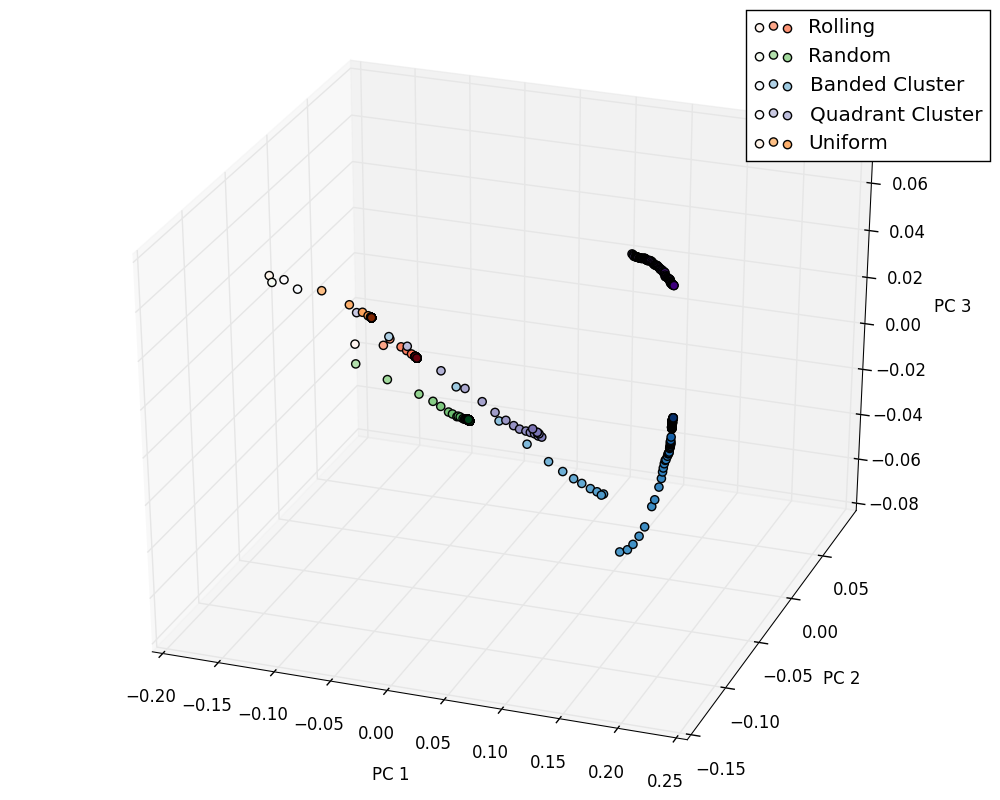 The plot above illustrates this. It shows for each simulation class as time moves forward the color of each point gets darker and closer to the subsequent point, indicating convergence of chord length distribution in simulation-time.

We also want to check that we chose an input metric (autocorrelations of pins and pins) that correlates to our output (chord length distribution). In a similar qualitative comparison as done above to verify steady state, we will show three simulations chord length distributions evolving in simulation time. These three were chosen from the random distribution class with a fixed percentage, so the differentiating parameter is the shape of the pin, i.e. 1 voxel, 2 voxel, and a 3 voxel long pins. 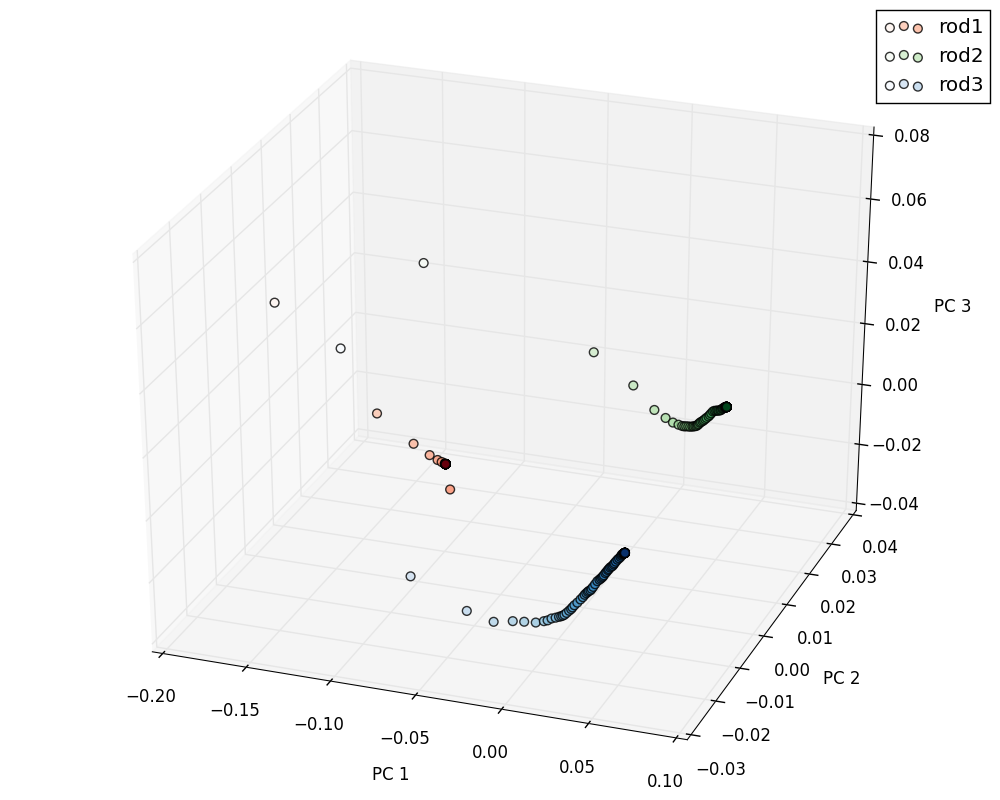 Just as we expected, each simulation convergences to a different point in PCA space which confirms that pin shape does affect grain size.

We can now plot our entire dataset in PCA space for the input and output PC values. These “master” plots are below.

To see how well PCA captures the variance of our dataset we can produce scree plots: cumulative percent variance for given amount of PC values. 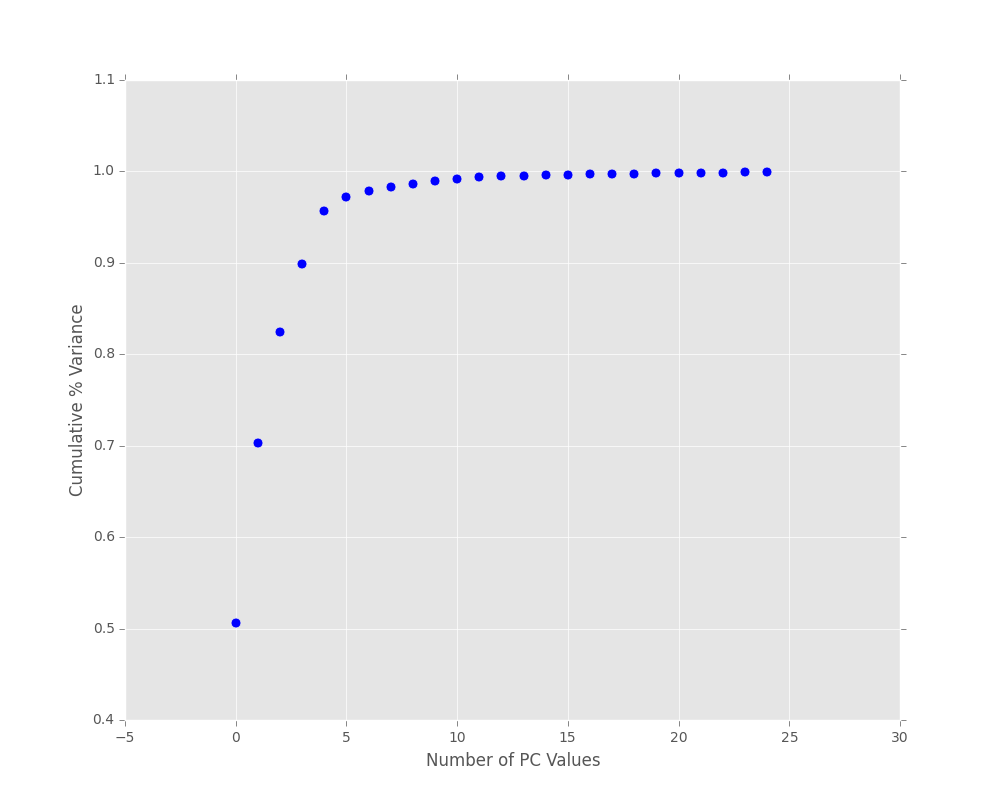 We can see that we are capturing 95% variance in the first 5 PC components. 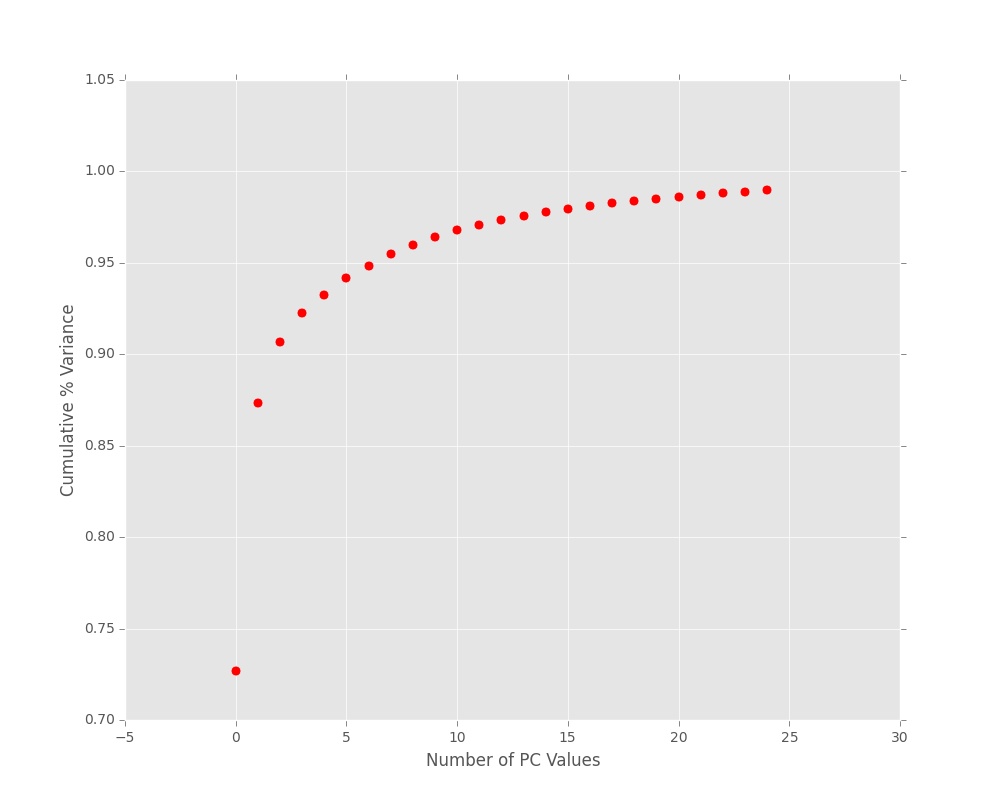 We can see that we are capturing 95% variance in the first 8 PC components.

Now that we have PCA data for our inputs and outputs we can perform regression to build a model between the two and construct a process-structure linkage. To do this we will use Scikit-learn Python implementation of linear regression. We can even optimize the model building procedure to find the best model for a given number of PC values (multiple linear regression) and polynomial degree (multivariate regression). We broke our data up into two pieces: 80% to use as training data, and the remainder 20% to use as test data. We then performed leave-one-out cross-validation methods to obtain mean squared error for each model. We did this for high combinations of PC values and polynomial degree and found the point at which we began to see over-fitting affect our MSE value.

From the code we receive the following output:

This shows our best model to build a process-structure linkage is a linear model using 10 PC components.

With the data we have generated through the semester we were able to use novel data science tools to develop a surrogate model for grain boundary pinning during grain growth simulations. More importantly, our work done establishes a material informatics framework that is generalized, automated, and scalable which can be extended to other models.

Our project encompassed data generation, simulations, material informatics problem solving, and analysis, however due to the amount of time in a semester we were not able to finish everything we initially sought. To improve our project we would like to:

As we worked on this project certain components underwent changes in research direction, so some of the older blog posts may not reflect the final content present above (or may even be irrelevant). If you have any questions regarding a specific component feel free to contact any one of the project members: